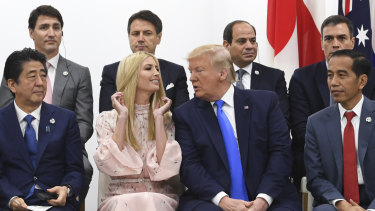 “It may be shocking to some, but being someone’s daughter actually isn’t a career qualification,” Ocasio-Cortez wrote on Twitter. “It hurts our diplomatic standing when the President phones it in & the world moves on.” (AOC)

“Ivanka Trump is not on the National Security Council – she is not an adviser on the issues being discussed,” Michael McFaul, an ambassador to Russia under former president Barack Obama, said of Ivanka Trump’s presence.

“So her presence undermines the professional look of the Trump delegation, both to other countries and to national security professionals in the Trump administration.”

President Donald Trump has come under fire for making family members part of his staff since the beginning of his administration, and then for clinging more tightly to them in a White House racked by turnover.

The President keeps the counsel of Ivanka Trump and Kushner closer than anyone, the official said.