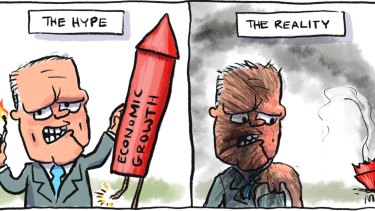 It laughs at Treasurer Josh Frydenberg’s claim in the April budget – and Scott Morrison’s claim in the election campaign – to have returned the economy to “strong growth”, which will roll on for a decade without missing a beat.

Why is the immediate outlook for the economy so weak and uncertain? Not primarily because of any great threat from abroad – though a flare-up in Donald Trump’s trade war with China could certainly make things worse – but primarily because of one big and well-known problem inside our economy: five years of weak growth in wages.

via After the hype, our economy’s grim reality setting in