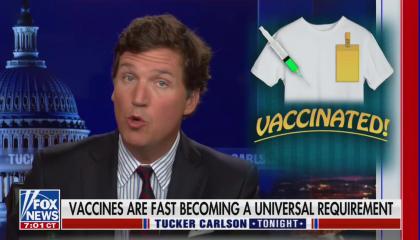 If you watch Fox’s coverage of the vaccine rollout over the last six months, there is one thing you know for certain: Fox hosts and personalities do not want businesses to require proof of vaccination, colloquially known as vaccine passports. But now we have learned that Fox itself requires a vaccine passport, called a “Fox Clear Pass.” Ryan Grim reported it on Monday morning, and Oliver Darcy further reported:

Source: At Fox, the call for vaccine passports was coming from inside the house | Media Matters for America