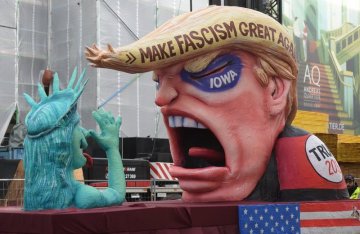 The parallels between Trump’s celebrity presidency and the patterning of fascist propaganda are plain to see: the relentless repetition and disinformation, the scapegoating of the Other, the strongman identity and victimhood, and the equating of his executive leadership with the greatness of the nation. Those are in addition to his arbitrary application of law, disdain for rules and bureaucracy, and substituting of mass entertainment for political power. Trump was not driven by allegiance to a coherent ideology like some of those in his administration. But his grandiosity, love for chaos, and penchant for tabloid-inspired emotion over fact, recalled history’s greatest autocrats—many of whom were also charismatic showmen guided by profits, image, power, and the old P. T. Barnum adage that “The bigger the humbug, the better people will like it.”

Source: The Apprentice, Trump’s Celebrity Presidency, and the Road to American Fascism | The Smirking Chimp