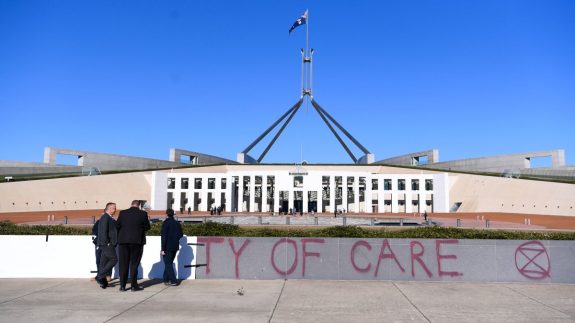 Tony Abbott, Malcolm Turnbull and Scott Morrison have similarly ransacked our national wealth for nine years. They have weakened Medicare, lowered taxes on the rich, stolen taxpayers’ funds to fund obscenely rich private schools at the expense of public schools, and gutted our universities.

They also spent billions adding to the fossil fuel companies’ ill-gotten gains, hamstrung climate change mitigation for a decade, and attacked our national cohesion with deliberate trashing of our international treaty obligations, especially regarding refugees, dog-whistling attacks on minorities, started an unnecessary war of words with China, and essentially destroyed our biodiversity so that land clearing can proceed.

But, I hear you say, we threw them out on their ear. We elected a reformist government, in whose DNA flows liberty, equality and fraternity.

We did change governments, but we are still on track to lower taxes to our richest minority. We still subsidise fossil fuel companies. We will not tax them for their ill-gotten gains, and we won’t even consider increasing the welfare payments of the poor.

Even though we know that it causes Australian children to go to bed hungry, and a recent finding that the average rent increase for the last year was $3000. That is, on average, $60 a week in rent alone. Then factor in energy cost rises, higher food costs due to shortages caused by floods, and you have a perfect recipe for a human disaster.

So there have been changes for the better, but this government is seemingly intent on ‘doing a Truss’, and going ahead with stage 3 tax cuts. Spare me from inhumane governments. They need to wake up as to why they exist, at all.

Source: Why elect governments if they don’t care about the people? – » The Australian Independent Media Network