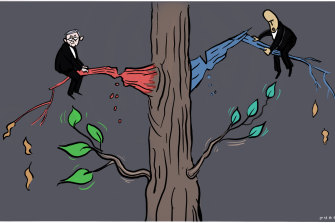 Our major parties’ primary votes are in structural decline, not because they are simply hopeless, but because our politics has fragmented to the point there are no natural majorities in Australia anymore. We now have majorities of dissent – so we can remove a government via a coalition of discontent, but any new government becomes vulnerable to a new dissenting majority forming around it. Our tradition of compulsory preferential voting has camouflaged this, artificially preserving two-party dominance. If we had a more European-style proportional system, we’d have had European-style results for a decade now: moving from one minority government to another, each made up of a temporary coalition of rivals. This might be the moment that our political fracturing finally overpowered the masking tape of our electoral system.

Source: Election 2022 results: There are no natural majorities anymore. Albanese’s might be the last one