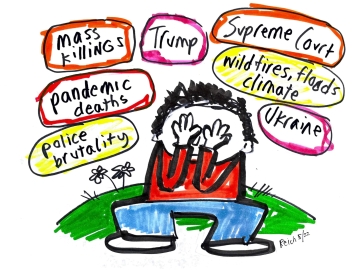 Peter Dutton claims to have a softer side. 1) We know he’s a Lib activist and strategist 2) We’ve seen the level of his empathy on show in the treatment he handed down to Biloela family in particular their Australian-born children. Coupled with the cry from the town. His “empathy”, an alternative fact, compared with that of the ALP’s. 3) We saw Dutton’s power, and were certain of his ability to use it. He arrogantly allowed two opere’s, illegal overstay, to be extended for a favor to a mate. 4) Yes. he now claims he has a softer side unseen for over 20 years because he presented out of necessity as the role model of a Liberal Politician. 5) Compare him to Albo or any ALP for that matter and Peter Dutton stands alone and not needed by anyone. 6) Dickson sent him that message with a slide of 2.6%

My wish for you in these trying times is that you not become immobilized or numb or selectively empathic — that you continue to respond to the suffering of others with concern and activism. In my experience, taking action – even a small effort to alleviate the suffering of others — is one of the most important means of remaining fully human at a time when the world’s pain can otherwise be overwhelming.