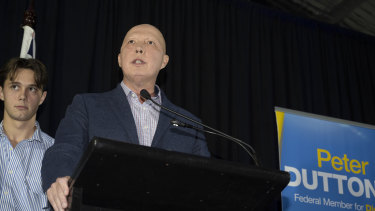 Let’s hope the Booby wins the leadership prize because he’s sure to lead the LNP further into purgatory. With Dutton, as a leader, there’s no return. The thought of Australia becoming a more equitable place and returning to a “fair go” is now a possibility.

Will the Liberals bow to the Nationals who saved their ass in the regional wilderness? Who will lead them back to respectability? Dutton/Joyce are climate deniers and have an iceberg’s chance in hell of becoming historic heroes . Watch their members abandon ship, because it will only get worse, as they make the LNP spend years in PUNISHMENT PARK. I’m sure there’s an Abbott still dreaming.

Scott Morrison’s strategy to win outer suburban and regional seats from Labor and hang on to power failed in the 2022 election, with Peter Dutton emerging as the man most likely to be the next leader of the Liberal Party.

Source: Election 2022 results: Peter Dutton to be next Liberal Party leader after Scott Morrison steps down