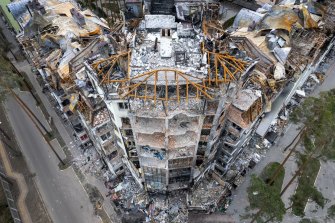 Russia will feel the impact of this historic uncivilized fascist carnage a century from now and yes Putin will go down with Stalin, Pol Pot, Hitler, as humanity’s greatest shame. Maybe not in scale but in unsubtle threat and intent. Russians rich and poor left or right will come to know the truth of what’s being done in their names.

The Donbas is the country’s mostly Russian-speaking industrial heartland in the east, where Moscow-backed separatists have been fighting Ukrainian forces for the past eight years and have declared two independent republics that have been recognised by Russia. In recent weeks, the Kremlin declared the capture of the Donbas its main goal of the war after its attempt to storm Kyiv failed. After withdrawing from the capital, Russia began regrouping and reinforcing its ground troops in the east for an all-out offensive. “No matter how many Russian troops are driven there, we will fight,” Zelensky vowed. “We will defend ourselves. We will do it every day.”