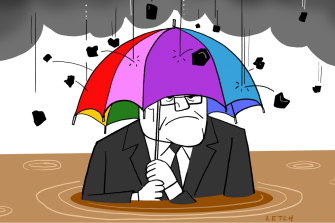 Don’t mention the Climate or the Change

“I think it is just an obvious fact,” declared the Prime Minister this week as he toured flood-ravaged Lismore, that “Australia is getting hard to live in because of these disasters”. What a frankly astonishing admission that is. How unvarnished. It isn’t relative or euphemistic. It isn’t “Australia is being affected by climate change”, or “we’re facing more natural disasters”. It’s absolute. “Getting hard to live in” has a ring of resignation about it. It’s like given the choice, humans would really rather live somewhere else.