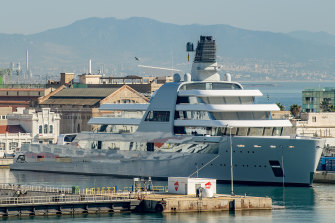 Trumpers are individual privateers just doing it for themselves. There is no Trickle Down only a Trickle Up end game as far as they’re concerned. Trump is playing that out through the Capitalist Democracy of America. It’s institutional court system allows payment for justice and appeals after appeals and can  be bought. Russian Oligarchs thought they were safe in that enviroment, but are now looking for safer, more hidden and dark harbors. Their DNA like Trump’s is the same and completely transactional.

The appearance of superyachts near the Maldives and Seychelles this week illustrates the degree to which Russian oligarchs are panicking in response to the sanctions the West has imposed on Russia and the ultra-wealthy businessmen seen close to Vladimir Putin over the invasion of Ukraine.Superyachts belonging to billionaires Victor Rashnikov, Oleg Deripazska, Alexei Mordashov and Andrey Kostin are floating around the island nations, according to Bloomberg reports.