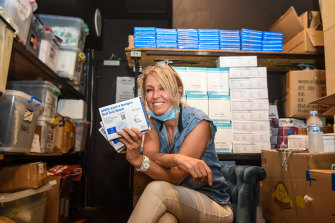 State and federal governments may be scrambling to secure rapid antigen tests to ease the burden on PCR testing, but several Melbourne businesses recognised the potential of the fast-acting and relatively inexpensive technology months ago. Nightclub owner Martha Tsamis has sold more than 800,000 of the 15-minute tests since October, when she negotiated distribution deals with manufacturers in Australia, China and South Korea. Ms Tsamis had originally bought a few thousand rapid antigen tests for staff and patrons of her late-night venues Chasers in South Yarra and Inflation in the CBD. Now, her new business Oz Medical employs seven full-time staff and supplies thousands of the tests to every Australian state – other than Western Australia, where they remain prohibited.