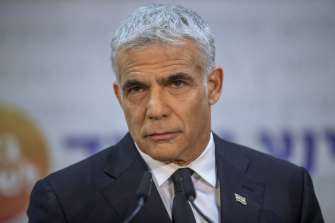 Problem is Israel doesn’t have a history of “sharing” it does have a history of “spying ” on it’s allies and transactional arrangements in its interests. It has kidnapped people from this country used imprisoned and killed Australians and has carried out its spying activities in other coutntries using false documents pointing to Australia. Of course it’s “Very Interested” in a closer network with Australia, It’s an opportunity for trade and further spying “on” us and not “with” us. We have just formed AUKUS and opened up to wider activities and Israel has jumped at it. “Beware of the Trojan horse” should go down in history as ” Beware of an Israeli Handshake” Meanwhile spyware is on sale to friends of Israel my ass spyware is on sale to anybody ready to pay. Simply look at the military equipment Israel has sold to African, Middle East and world dictatorships.

Mr Lapid said striking a free trade agreement with Australia was also a priority which would “expand trade and help create jobs in both our countries”, and floated the prospect of direct flights between the two countries.