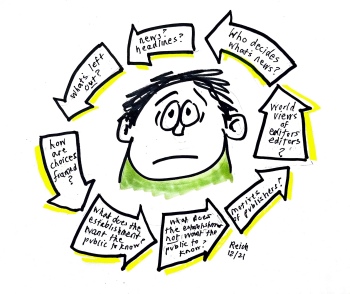 In Australia I follow AIM, IA, Michael West Media all of whom aren’t included in any Morrison Government Media plans to have Big tTech pay.. The Shovel and the The Shot are good for a laugh. There is truth in humor and it often hits the target. These are just a few along with some others listed below.

I follow the mainstream media, but I don’t limit myself to it. And I don’t rely on it to educate the public about bold, progressive ideas that would make America and the world fairer and stronger. I read the Guardian, the American Prospect (which, full disclosure, I helped found thirty years ago), Mother Jones, and The Atlantic. I follow several blogs (Daily Kos and Talking Points Memo, for example). I listen to the always thoughtful Democracy Now. And I subscribe to a few newsletters (I hope you like this one and spread word of it). But even with news sources I trust, I still ask myself: how are choices being framed? What’s being left out? What big underlying issues are being assumed away or obscured? When our democracy is under assault from so many directions, I think we need to educate and re-educate ourselves (and our children) about how to learn what’s really going on — how to absorb the news critically. Isn’t this a minimal responsibility of democratic citizenship? What do you think?

Source: Why I Don’t Trust the Mainstream Media | The Smirking Chimp