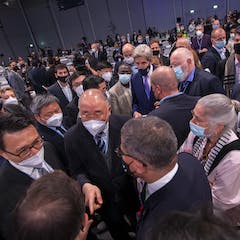 After two hard-fought weeks of negotiations, the Glasgow climate change summit is, at last, over. All 197 participating countries adopted the so-called Glasgow Climate Pact, despite an 11th hour intervention by India in which the final agreement was watered down from “phasing out” coal to “phasing down”.

Source: The ultimate guide to why the COP26 summit ended in failure and disappointment (despite a few bright spots)