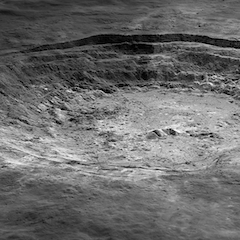 Each cubic metre of lunar regolith contains 1.4 tonnes of minerals on average, including about 630 kilograms of oxygen. NASA says humans need to breathe about 800 grams of oxygen a day to survive. So 630kg oxygen would keep a person alive for about two years (or just over). Now let’s assume the average depth of regolith on the Moon is about ten metres, and that we can extract all of the oxygen from this. That means the top ten metres of the Moon’s surface would provide enough oxygen to support all eight billion people on Earth for somewhere around 100,000 years. This would also depend on how effectively we managed to extract and use the oxygen. Regardless, this figure is pretty amazing! Having said that, we do have it pretty good here on Earth. And we should do everything we can to protect the blue planet — and its soil in particular — which continues to support all terrestrial life without us even trying.