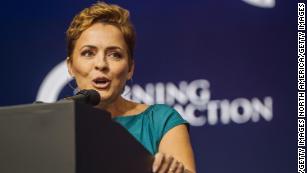 Kari Lake, the Arizona gubernatorial candidate recently endorsed by former President Donald Trump, has embraced fringe far-right figures in her campaign events, including publicly thanking a Nazi sympathizer for his support and appearing with figures linked to the QAnon conspiracy, a CNN KFile review of her appearances has found.