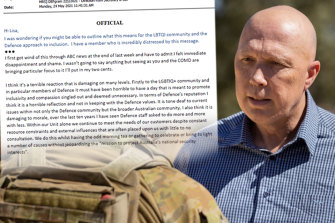 He really believed he could be this country’s PM. He mocked our Pacific neighbors and had no qualms sneaking in Operes as a special favor for a mate. Apparently, if he had his way the Sydney Mardi Gras would be banned because it’s “woke” and a critical want to replace heterosexuals in every aspect of our institutional lives. Peter Dutton is our paranoid Minister of Defence and showing Australia he’s doing his job and not acting on his personal whims.

The Sydney Morning Herald and The Age in May revealed that the Defence Minister had ordered his department and serving military personnel to stop events with “particular clothes in celebration” after Defence held morning teas where staff wore rainbow clothing to mark IDAHOBIT. Mr Dutton told Defence Force Chief Angus Campbell and secretary Greg Moriarty to issue a note ending such events, saying he would never tolerate discrimination but would not pursue a “woke agenda” either.