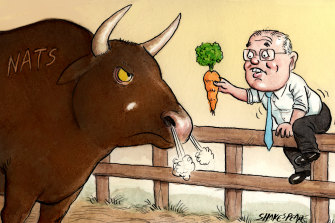 The breakdown over the NEG was the trigger which cost Malcolm Turnbull the prime ministership a week later. This time Pitt is waiting to see Scott Morrison’s plan before he decides his next steps but makes no secret that he implacably opposes net zero.

Source: Wooing the hostile beast within