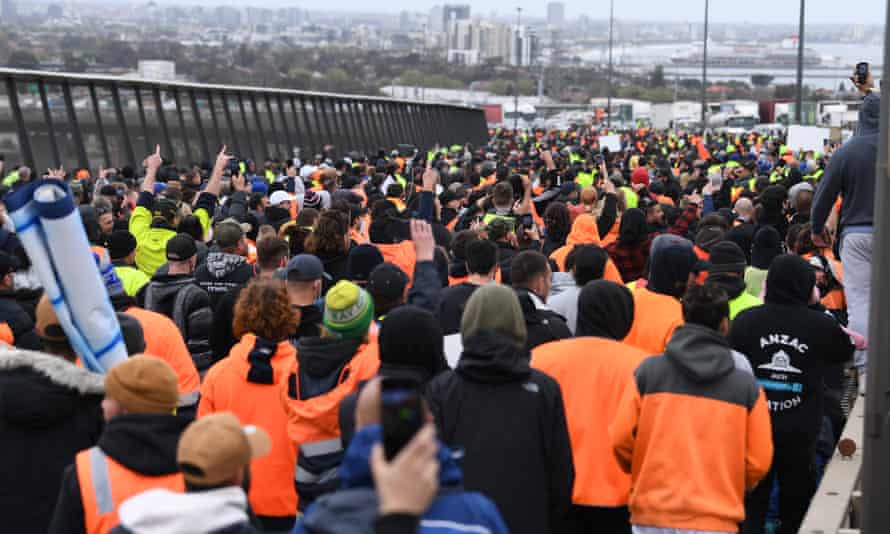 Some in the crowd certainly appeared to have far-right sympathies. There was one who identified as a Proud Boy, someone who complained about the New World Order while wearing a Donald Trump hat, two Trump flags were waved by people in hi-vis, and a former member of the United Patriots Front was spotted in the crowd on the West Gate Bridge. But for the most part, the thousands who gathered were not identifiably aligned with any political group or message, save for being anti-Daniel Andrews and anti-mandatory vaccination. Some said they had been CFMEU members for decades, others were clearly young tradies. Some hi-vis gear had cement stains, others looked as they were wearing it for the first time. Many were keen to stress they had no connection to the far right. Quick Guide How to get the latest news from Guardian Australia Show Tanuki said it was much too simple to label those attending the protests as neo-Nazis or far-right agitators. “I don’t agree with Setka saying they’re all ‘neo-Nazis’, this is dumb or sloppy or inaccurate. But they’re sent out by anti-vaxxers; that’s what they are. And their immersion in the anti-lockdown scene makes them predisposed to the manipulations

Source: What do we know about the protests in Melbourne, and how did the numbers grow? | Victoria | The Guardian