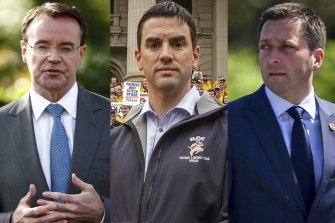 Mr Guy is seen by supporters to have better political instincts and cut-through than Mr O’Brien. Some MPs think the former leader, who was heavily defeated in the 2018 poll, has more energy in front of the camera, an attribute that is crucial for relevance-deprived oppositions who have struggled to achieve success across the country during the pandemic. However, Mr Guy will probably come under scrutiny for his rezoning decisions as planning minister in the previous Liberal government, as well as the infamous “lobster with a mobster” scandal sparked by his dining with an alleged mafia leader. Mr O’Brien begun contacting MPs to shore up support on Sunday evening. Neither Mr Guy nor his supporters were returning calls from The Age on Sunday night.