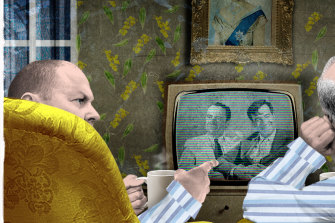 Mutual support, loneliness, convenience or a dose of good old-fashioned paranoia appears to have brought the two closer together. The object of that paranoia is Peter Dutton.

Frydenberg and Morrison are tied together by their apron strings now, but there is no knowing how or when it will end. Related Article Too often Scott Morrison finds himself on the backfoot. Editorial Scott Morrison Morrison’s leadership weaknesses all too clear The Age’s View The Age’s View Editorial In 2018 Frydenberg welched on a deal with best friend Greg Hunt to run for the deputy leadership which he won handsomely. He can be a mongrel when advancement beckons. In the first leadership ballot, enough of Morrison’s “God Squad” voted for Dutton to guarantee Malcolm Turnbull’s destruction. It didn’t stop Morrison throwing his arm around “my Prime Minister” Turnbull in front of cameras to deflect questions about his own ambition.