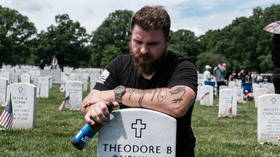 The forever wars that the US launched after 9/11 led to a surge in military suicides, a new study claims, with traumatized soldiers taking their own lives as they are repeatedly deployed in conflicts that have no public support.

Source: 4 times as many US soldiers and vets died by suicide than in combat since 9/11 War on Terror – study — RT USA News