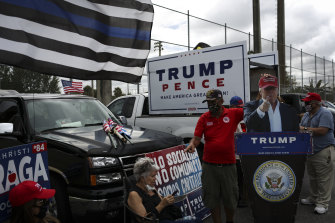 In Florida last week, two armed men dressed as security guards stood at a campaign tent outside a voting centre, falsely claiming they had been hired by the Trump campaign to guard the area.

In Pennsylvania, Trump officials videotaped voters as they delivered their ballots into drop boxes, supposedly in a bid to catch potential violations.

Source: US election 2020: The tactics used to suppress and contest the vote