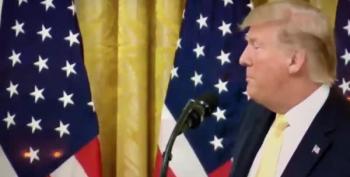 Trump went on to expose how clueless he is (once again) about the meaning of First Amendment or the important role journalism plays in American democracy.

“See I don’t think the mainstream media is free-speech either because it’s so crooked, so dishonest,” Trump said to his audience of plagiarists and charlatans.

He continued, “We don’t want to stifle free speech but that’s no longer free speech. To me, free speech is not when you see something good and then you purposely write bad. To me, that’s very dangerous speech, and you become angry at it. But that’s not free speech.”

Trump makes believe that everything he says or does is good, and just and the greatest of all time in American history. If a journalist, reporter or analyst claims otherwise, they are making up lies about him and they should be imprisoned.

Putin and Kim Jong-un would be proud.