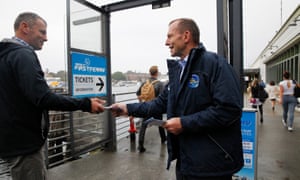 Tony Abbott and like-minded conservatives are in the midst of a concerted push to claim back the heart and soul of the Liberal party and potentially reinstall him as leader should the party find itself in opposition after next year’s federal election.

The tight-knit group, which includes Abbott, the MP for Hughes, Craig Kelly, the MP for Canning in Perth, Andrew Hastie, and the New South Wales senator Jim Molan have embarked on a series of events at rightwing branches exhorting conservatives to take back control of the Liberal agenda.

On Thursday night Abbott will hold a gala fundraiser for his campaign to retain the seat of Warringah, where he is almost certain to face a significant challenge from an independent in next year’s federal election.