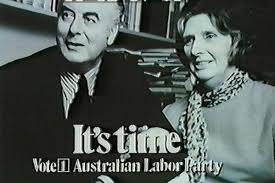 Within hours of the news that Gough Whitlam had died, age 98, the mantra of ‘hopeless economic management’ started to flow.

According to those who clearly loathe Whitlam and anything vaguely socially progressive, Fairfax and The Australian had stories where the Tea Party faithful in Australia wrote or were quoted saying, Whitlam was the worst Prime Minister Australia had seen, he was economically damaging, that he set up the culture of entitlement especially for health and university education, that he created the mentality of the dole bludger and so on.

I am sure you get the drift.

The criticisms were, as far as I can tell, nothing to do with managing the macroeconomy or the budget. They were focussed on the perception that he allocated too much government money to healthcare, education and the aged. That may or may not be the case, but no one has said why it matters or indeed, by how much the spending was excessive and exactly why it remains a problem.

No one has articulated and demonstrated why the clear and dramatic lift in government spending some four decades ago is so damaging today. Nor have they shown how those criticisms have manifest themselves into things Australia has not experienced such as prolonged sluggish economic growth, falling living standards, problems on the budget, chronic unemployment or whatever.

No substance, only high brow fact-free opinion and zealotry.

The scathing criticisms of Whitlam and his legacy need to be put in some context.

Since his sacking, some 39 years ago, the Coalition parties have been in power for about 20 years, so one would have thought that if the Whitlam legacy was so bad, so damaging, so horribly yukky, that Fraser’s seven years, Howard’s 11 and a half years and Abbott’s 13 months in office would have, in at least one of their budgets, scaled back, reversed and once and for all ended, the Whitlam economic legacy.

With Mr Hockey’s budget less than six months ago, government spending to GDP, even allowing for the cuts that were announced, was estimated to be 25.3 per cent of GDP in 2014-15 and at or above 24.7 per cent of GDP in every year of the forward estimates. So Abbott and Hockey’s small government budget had spending a bit lower that Fraser, but still above the ‘big spending’ Whitlam budgets.

That’s the first point to note.

Could it be the electorate like the government to have some role in health, education, aged and disability care?

My guess is ‘yes’. Look at the public’s reaction to the Abbott government’s proposed Medicare co-payment, university fee hikes and cuts to unemployment benefit eligibility.

It is also interesting to note that in the early 1970s, government spending in the US rose sharply, by around 3 per cent of GDP in about half a decade. Surely Gough did not influence Nixon and Ford to spend, spend, spend? Maybe the social changes of the 1960s and 1970s in the western world saw the electorate demand, and get, a greater role from government.

And a few final fiscal facts:

When Whitlam left office, the tax to GDP ratio was around 20 per cent. The Howard government got this up to an all time record tax take exceeding 24 per cent of GDP (in today’s dollars, 4 per cent of GDP is a stonking $65 billion per year).

It is funny how facts can smash perceptions.

Footnote: All the data on spending and tax are from Mr Hockey’s budget papers.