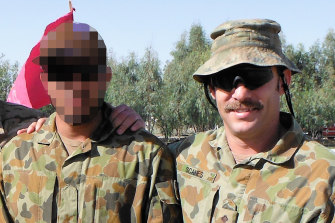 To some Morrison is the virus

9 View all comments Advertisement Captain Jason Scanes is an Afghanistan veteran who since 2013 has been trying to get his own and other Afghan interpreters safely to Australia in return for the faithful service they rendered our Diggers while there. He ramped up those efforts earlier this year, when it was announced the Coalition was pulling out and their lives would be at risk from the Taliban. He got nowhere.