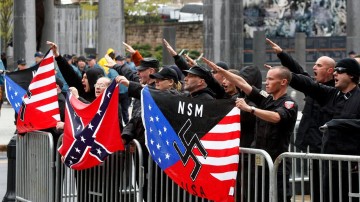 Trump’s campaign people are already talking about holding rallies as Trump blackmails the states by pushing his “open up” madness. “Lock her up” chant doubles down on hatred for Hillary Clinton, or these days for Nancy Pelosi and Joe Biden, for those in love with Trump, by loudly calling for his political opponents to be imprisoned without trial for unspecified crimes. If you don’t believe me, listen to the chant the next time he holds a rally. Trump’s followers are both swearing allegiance and saluting him. “Lock her up” is Trump’s “Heil Hitler.”

via “Obamagate” And “Lock Her Up”: Pointing the Way Toward “Heil Trump” | The Smirking Chimp