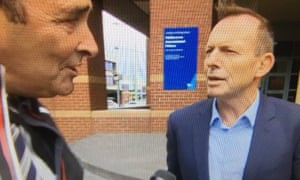 The former prime minister Tony Abbott has been filmed leaving the Melbourne prison where the convicted paedophile Cardinal George Pell is being held, with the former Coalition leader saying he was there “visiting a friend”.