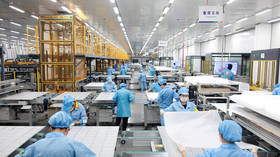 With US President Donald Trump touting the completion of a trade deal, China has won the World Trade Organization’s permission to impose $3.6 billion worth of retaliatory sanctions against the US.

The WTO ruling may give Beijing some clout. The organization’s appeals judges agreed that the US was not in full compliance with a WTO ruling after Washington placed tariffs on Chinese solar panels, steel cylinders and wind towers.

In China’s big win, the WTO is allowing the country to impose higher tariffs than currently allowed by the global trade body, as well as giving China more freedom to target US products and sectors of its own choosing.

China’s willingness to seek approval from the WTO, rather than impose such sanctions on its own terms, shows that Beijing is willing to take a measured approach to resolution. Trump has previously threatened to withdraw from the WTO if the organization doesn’t “shape up.”

via China wins over US in WTO dispute as Trump talks trade deal, approved for $3.6 billion in retaliatory sanctions — RT Business News