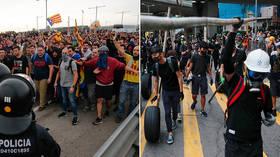 George Orwell’s novel 1984 was supposed to be a dystopian work of fiction, a warning of the perversions of truth which would be required to sustain totalitarianism if we were not careful.

In 2019, it has become a User’s Manual, a play-book, and some of the worst hypocrites in the world – otherwise known as the free-media in free-countries – deploy it to the nodding approbation of the political-classes they serve.

As Humpty Dumpty said, “The question is, which is to be master – that’s all.”