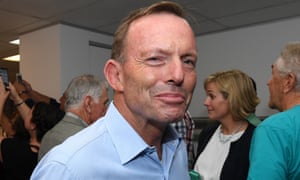 Asked by the Sydney radio 2GB host Alan Jones on Friday morning whether his successor had been “sticking them [wind turbines] up there” in his former electorate, Abbott replied there had been “a lot of wind, but not too much action”.

“And thank God,” he told Jones. “Because the last thing we want is what I regard as the dark satanic mills of the modern era spoiling our landscape.”

Abbott declared in 2015 he wished the Howard government, of which he was a member, had never implemented the Renewable Energy Target. He then signed Australia up to the Paris agreement while prime minister but later campaigned for Australia’s withdrawal when he was returned to the backbench following a leadership coup.