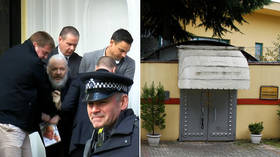 That said, the decline of moral standards and creeping dishonesty amongst the US leadership is broad. For instance, asked this week why Washington endorsed the Israeli seizure of the Golan Heights but sanctioned Russia for its reabsorption of Crimea, Secretary of State Mike Pompeo told senators there was an “international law doctrine,” which would be explained later. Of course, it turned out there was no such thing.Pompeo’s boss also struggles with the truth. On Thursday, Trump said “I know nothing about WikiLeaks. It’s not my thing.”Yet, in 2016 he called it “a treasure trove,” saying “I love WikiLeaks.”

via American values: Embassies are for chopping up journalists, not protecting them — RT Op-ed