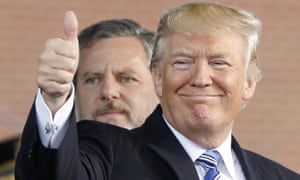 Easy come, easy poll: on Monday, Gallup had Trump back down at 41%, as Americans learned more about his policy of separating migrant families at the US border. In fact, Trump’s approval rating during his first term has been “incredibly stable” within a band from about 36% to 43%, polling analyst Harry Enten and others have pointed out.

Under normal circumstances, an overall approval rating much under 50% would spell doom for an incumbent president, ruling out re-election. And 90% in-party support is not unusual in recent presidential cycles.

via Is Trump really winning? The truth about the president’s popularity | US news | The Guardian